"When you're accustomed to privilege, equality feels like oppression."
—unknown source

"Quit whining, it's the same distance." 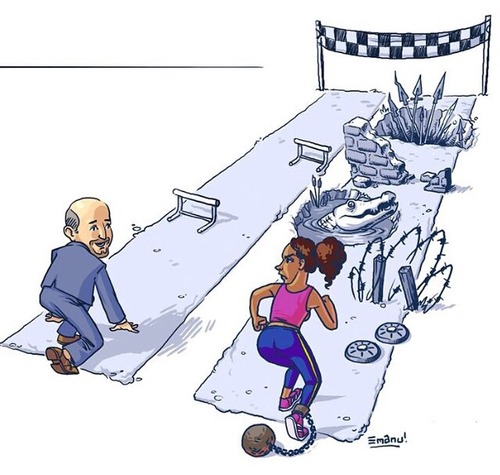 —The Pencilsword: On a plate

To my Jewish, Irish, Asian and Italian friends, let’s remember:

Your ancestors were lower than dirt when they arrived here.

Italians were referred to – openly – as a subhuman race of rats and criminals.

Irishmen were apes and monkeys.

Laws were passed to keep Chinese women out of the country, so that the Chinese males who were brought over for menial labor couldn’t produce offspring.

Jews were spat upon in the streets and routinely excluded from polite society.

Unhire-able. Undesirable. Laws were passed to allow for the mass discrimination and segregation of your great grandparents, not much more than a century ago.

From To my Jewish, Irish, Asian and Italian friends

A nice video about a simple running race:

These are excellent articles or resources that have taught me some things about the world: - You Should've Asked - The Bechdel Test - Interrupt Me One More Time - Aubrey Hirsch: Medicine's Women Problem - Gemma Hartley: Women Aren't Nags—We're Just Fed Up Here's a quote or image…

As someone who struggles to speak up, I remember when I first learned about "assertiveness" This was a revelation. I tended to be passive, and I feared that speaking up would be too aggressive. In my mind, there was passive on one side, aggressive on the other, and very little …