Text is brilliant. You should always bet on text. Text has tremendous power.

But interactivity is good too.

A Journey Through the History of Ideas (Successful or Discarded) in the Realm that intersects Text with Interactivity.

Here is a series of ideas I find interesting, many of which combine text and interactivity.

Many are from demos that were never realized, confined to the marginalia of history. Some became very influential.

Flickering fire light and shadows on the wall of a cave.

Nothing else has quite the ancient power and rustic charm as the dawn of human fascination when the first great fire ape sat in the darkness and saw finger silhouettes projected on the side of a cave by a friend's skilled finger silhouettes, and wondered "When will this be featured on netflix?"

The first writing was also the first bar code. Pots with a number of dots on its side. If a pot says "10" on its side, but inside there are only 3 duck eggs, then there has been tampering en-route, and the messenger should not be paid for the delivery. As such simple marks on the side of a vessel are the first written contract.

Voting with chips (voting for who should be banished from the city.)

First the printing press and for this we go back to Johanes Gutenberg. The ability to move letters around, endlessly reconfiguring them, was a key to the rise of the Gutenberg galaxy.

Skip a few years, past the garden of forking paths and we find.

"A mesh of associative trails "

Now we're unstuck in time. Or were. Or are. Or will be.

It's 1945, both before and after Hiroshima, a foot in each world: Vannevar Bush publishes As we may think, outlining how collective memory will be available to all in a machine called the Memex.

Vannevar imagined people blazing and sharing "A mesh of associative trails" through the collective knowledge space. Imagine a guided tour bus. The tour guide gives information, takes you to the sites where you can hop off and have your own experience. The next bus arrives as soon as you want it. The tour guide knows all. You can create your own tour as well.

from: HyperTextHistory, and see Boxes and Arrows

"Everything is Deeply Intertwingled" 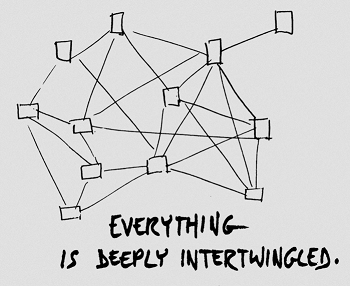 We're unstuck in time. It's 1967. It's 1960. Ted Nelson's Project Xanadu is the first hypertext project. The world wide web, that is inspired by it decades later, fails to live up to the goals of Project Xanadu.

It's 2018. Ted Nelson explains that we still don't have "visible connection" and "parallel documents" — see video, it's a gem:

Stretchtext consists of ordinary continuous text which can be "stretched", or made longer and more detailed. By pointing at specific areas and pulling the throttle in the "magnify" direction, the reader may obtain a greater detail on a specific subject, or area of the text. The text stretches, becoming longer, with replacement phrases, new details and additional clauses popping into place.

Terry Pratchett said this about J.R.R.Tolkien:

Most modern fantasy just rearranges the furniture in Tolkien's attic.

Similarly, most modern computing just rearranges the furniture in Douglas Engelbart's attic. As Ted Nelson says in this interview

He [Douglas Engelbart] invented word processing, outline processing, computer graphics, hypertext, the mouse... and all of this was part of his singular dream of 'How do we make people more powerful'

It's 1951, we're unstuck in time. Yesterday, Douglas Engelbart got engaged to his future wife. He decides to think about his career goals. He decides he wants to do something important to help the world to work together on complex urgent problems. We need to get much better on an exponential scale. Computers can help maybe?

It's 1961. Doug's techniques amount to what he calls Intelligence Augmentation. In the way that a hammer extends and augments the leverage and power of the human arm, our tools should extend and augment the intelligence of our minds.

The mouse and hypermedia are here to stay, but many ideas from Engelbart remain "unrealised" today.

Have you noticed the problem with the mouse is that you have to keep switching between mouse and keyboard? So much so that some people avoid using a mouse altogether and just get really good at using keyboard shortcuts and other wizardy.

Doug was aware of this problem and invented the "Keyset" - a "chord keyboard" you would operate with just one hand. The mouse in one hand, the keyset in the other:

It has just five keys, but combinations of keys (like chords on a piano) would produce different letters. Read more about it, including Doug's teaching method.

Here's a url I copied and pasted from Wikipedia:

It's the profile of the inventor of Copy and Paste, Larry Tesler, who worked with Tim Mott on the first implementation of Copy and Paste. Their work has been copied (and pasted?) many times since.

I love this quote about the invention of the Browser:

I just had to add hypertext, (by subclassing the Text object).
—TimBL

Some early browsers were text-based, such as the very famous Lynx.

A modern text based browser is brow.sh. It has to be seen to be believed.

Ward Cunningham and others were discovering patterns everywhere they looked in programming. They couldn't record them quickly enough, so Ward made the Wiki Wiki: from an hawaiian word for Quick. It was a minimal addition to plain text that created new links to new pages any time the author joinedWordsTogether.

There's magic in Ward's innovation. Two or more words, if brought into contact with each other, emit a burst of energy: a new concept is formed and the power of their union tears a wormhole through space, leading to a new page. 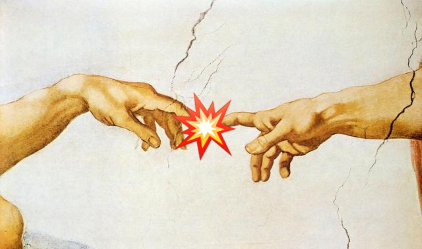 Any link was also bidirectional. Click the heading of a ward's wiki article to see all the pages that link to it.

The other revolutionary innovation was that he let everyone edit.

No permission model at all. You can read? Fantastic, then you can also edit.

A change log meant that everyone could see where changes were occurring and quickly revert any vandalism. It was the "forgiveness over permission" model, espoused by Grace Hopper.

People poured many many words into that Wiki Wiki. It was in the era when the internet truly was "words plus enthusiasm" 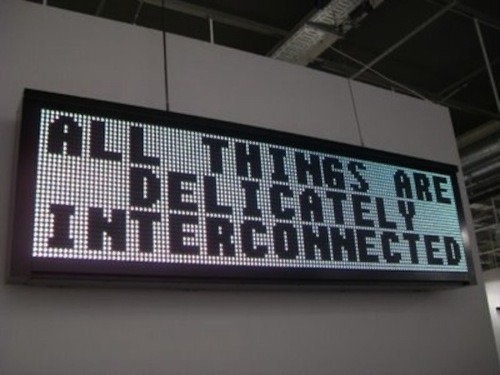 Some of my favorite pages in ward's wiki:

Ward Cunningham knew how to get at the truth:

The best way to get the right answer on the Internet is not to ask a question, it's to post the wrong answer.

One of the inspirations for Wiki Wiki was HyperCard: a pre-WWW technology that let you build a personal information system in a dynamic and programmable way. There was considerable HyperCard Mania!. It was a time when the Citizen Programmer seemed to be the way computers were headed.

Personal wikis such as the amazing Tiddly Wiki are great to explore and use. (I'm interested in TiddlyWiki in the Sky for Dropbox

It's not a long journey from there to note taking systems such as:

...or other interesting tools such as

There are many great note taking systems throughout history, such as Cornell, shorthand, concept mapping, SQ3R and sketch notes (more on sketchnotes).

When studying physics in high-school, and particularly when studying engineering, we were encouraged to keep a Scientific Journal or Scientist's Notebook.

Here's a typical page from my journal in those days: 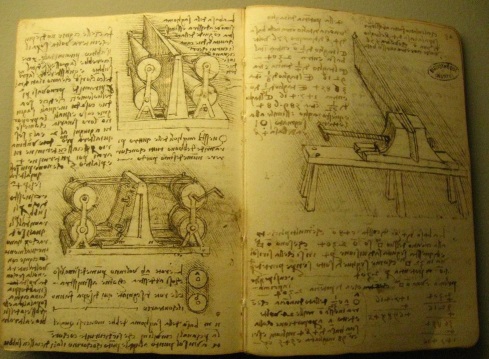 No wait, that was one of Leonardo Da Vinci's notebooks. We're unstuck again.

Kepler -- when was he? -- he kept great notes including his thought processes which give incredible insight -- covered in 'Range' by David Epstein)

A star in the field:

and related innovations -- jupyter style notebooks in every language (particularly those that suit it best - declarative, functional)

These allow code and its output to be inspected and executed, on any computer, in a logical and reproducible manner

In architecture and programming we talk of "patterns" and the wiki was invented to capture their myriad forms. A different but very similar concept from the creative arts is the idea of "Tropes" and in particular the "TV Tropes" website.

Patterns and tropes are synonyms.

The big list of rpg plots is also the kind of problem wikis were made to solve, as is The Top 100 Things I'd Do If I Ever Became An Evil Overlord -- though wiki's are great for lists, they tend more toward sprawling networks of information.

Addressing and identity are a crucial part of hyperlinks and versatility

if everything is addressable you need a kind of scheme or protocol for identifying things.

in Hyperscope, every element is automatically numbered. Easier than asking the author to name each thing.

With markdown libraries they can automatically name every heading for you. Very helpful and takes the onus off the author to decide which parts of a document can be linked to.

In the original Zettelkasten developed by Luhmann, there is a clever numbering system that allows for arbirtrarily inserting items between existing items - either as siblings or children - without ever running out of numbers or going too deep. See Luhmann's Numbering System

An Introduction to Purple

A reference system with addresses can either return a single thing, a list of things (or other possibilities [i.e. graphs] covered later... let's stick to these two possibilities for now).

For example, a primary key only returns one item, similarly in CSS, a '#ID' selector (should 🥴) only return one element (but this is an unenforced constraint) but other ways of selecting can return many homogenous things, e.g. select * from person where managerid = 1, or many heterogeneous things - $(".item") - elements returned can be of many different types.

Predicates that are applied to sets to filter them.

Address by text snippet -- link to text fragment -- now built into chrome. But ability to right click some selected text and generate link to text fragment url is not yet available. This chrome app adds that ability: https://chrome.google.com/webstore/detail/link-to-text-fragment/pbcodcjpfjdpcineamnnmbkkmkdpajjg?hl=en

Ajax, perhaps the earliest surviving tragedy of Sophocles, presents the downfall and disgrace of a great hero whose suicide leads to his rehabilitation.
—A.F. Garvie in Sophocles: Ajax

What I believe I need: 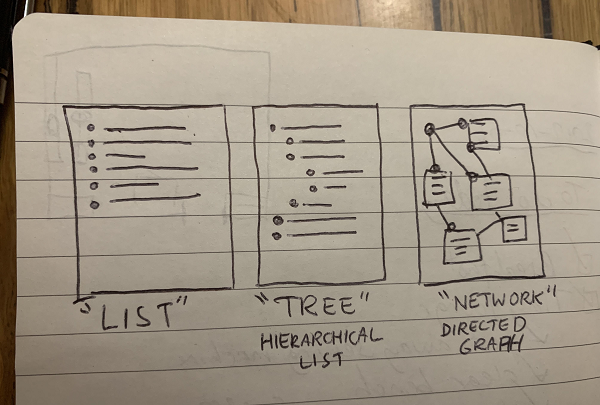 Indexes are not neutral

This thread from Amy Hoy links to many of her previous tweets or threads on her eternal quest to create or discover adequate tooling for writing and researching: here’s a thread of my rants about hypertext, documents, linking, note-taking and writing tools in no order

All good and fun stuff.

This "Code browser" takes it to other levels... 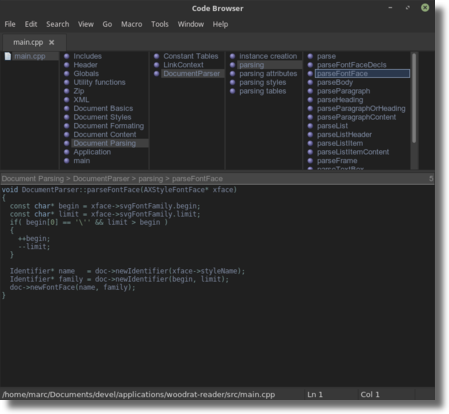 ...not really a text idea, actually a gui idea... but it's this: by creating a semi random but persistent island on which your groups of notes live, your memory gets to use its navigation-boost to memory/learning... and thus you can find things more easily. 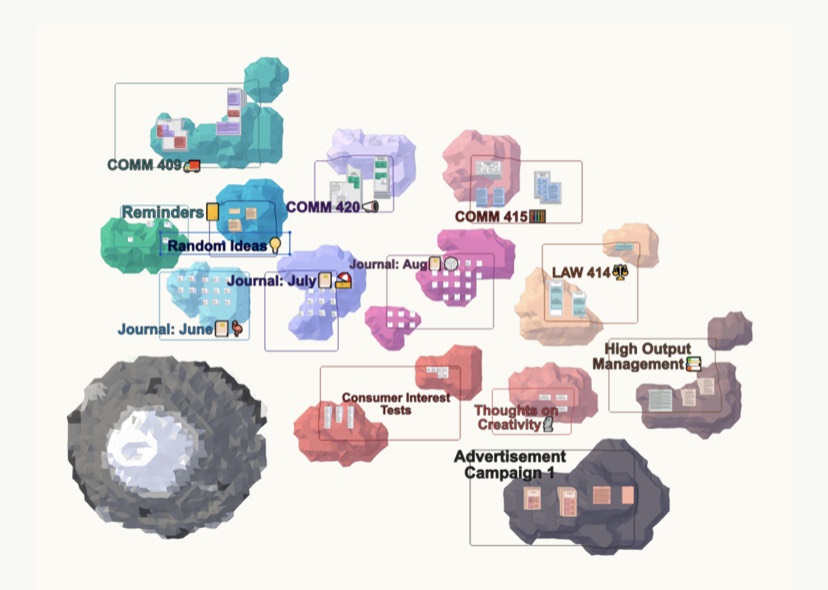 Why an island map though? What about a room, a cave, a graveyard, a shelf, a shrub a forest, a family, a house, a mansion

Down arrow above is based on "Arrow Down by James Cottell from the Noun Project," a SVG I modified.