Nonsense is nonsense. But the study of nonsense? That is a science.
—Saul Lieberman

Apophenia is when the human mind finds meaning in the meaningless.

A specific well-known special case of apophenia is pareidolia: the seeing of human faces in things which do not contain human faces. Like this face on Mars, or Jesus in this piece of toast. 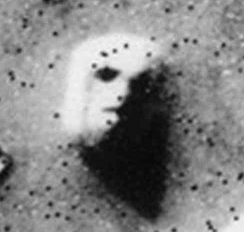 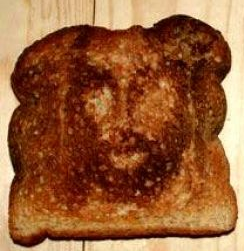 Jesus in a piece of toast

The problem with confirmation bias is that once you know what it is you begin to see it everywhere.

Apophenia is a risk any time that a "search for meaning" is performed. And searches for meaning, high and low, are performed constantly.

A low example: as I type this on a phone, the phone's software is looking at every word I type, and searching for meaning. If it sees an error it quickly tries to substitute it with the correct word. If I gets it right, we don't even notice. If it gets it wrong, we're frustrated. If the mistake has an accidental second meaning, then it can be funny. It's reminiscent of a Freudian slip.

When there is a motivation, a reward, a series of tantalising clues, then the hyperapophenia is induced.

The experience of serendipity is a precursor to Hyper-Apophenia. The feeling of déjà-vu

Somewhere Richard Feynman writes that when the quantum electro dynamic theory fell upon him he had a vision for a moment that the entire universe might be a single subatomic particle bouncing back and forth through time interacting only with itself. I've never been able to find the place where he wrote. If you know it please write it on a postcard and send it to me here in the penitentiary.

(It is on such a day that I am apt to make one of those haphazard encounters which will alter the course of my life.)

one will find monochromatic cliques in any edge labelling (with colours) of a sufficiently large complete graph.

Frank Plumpton Ramsey, after whom the theory is named, is also, so it happens, quite by chance, the discover of this theorem. Apophenia can be an early sign in the onset of schizophrenia. An ironic eruption of apophenic manifestations can co-occur in numerous maladies of the mind, quite by chance.

But what of people who fail to see the meanings right in front of them? What syndrome have they fallen to?

The opposite of pareidolia is arguably propopagnosia, a situation whereby, when reaching for your hat you're likely to almost remove from its shoulder's your own wife's head, or so the classics would let us believe, quite by chance. But beyond propopagnosia, what is the more general syndrome of failing to pick up meanings, when meanings are truly there?

A doctor decides to administer a Rorshach test and takes the cards from his desk, shows them to the patient who - etc - until the patient responds "You think I'm obsessed with sex? I'm not the one with all the dirty pictures!"

An unmotivated seeing of connections. In the last months of his life, Hemingway was certain the government were following him.

Even close friends wrote these off as paranoid delusions. 20 years after he died, the FBI released their Hemingway files. 120 pages. He was watched right up until the end. 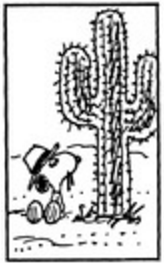