The secret source of humor itself is not joy but sorrow.

Analyzing a joke is like dissecting a frog, in the end they both die.
—Woody Allen

I used to believe that jokes stopped being funny when they were analyzed. But since becoming a father I have undergone a radical transformation of my understanding of humour, and now realize that explaining a joke can only ever make it funnier.

A great idea for a website would be one that contains all of the jokes in existence, and along side them, the commentary that explains how they work and why they are funny.

I've looked into making such a site, but was perturbed by the realization that most jokes are harmful. They are racist, sexist, classist, ageist, or some other "ist"; they work by delineating an in-group (to which the audience belongs) and an out-group, the "butt" of the joke.

Regardless, here is an analysis of a joke.

A horse walks into a bar. The bartender says "Why the long face?"

This joke is funny from beginning to end, and if you don't agree, I will persuade you now.

Let's take a look at this joke, word by word.

Already you are certain that this joke is going to be a good one.

Good jokes always have a great beginning. If a joke started with "A chair" then you would not be expecting very much. Jokes starting "a chair" have a very poor track record. I don't wish to be-labour this example, but there's almost no humour in chairs. Horses, on the other hand, are pretty much always good for a laugh.

Now the dangerous thing with a great start to a joke is that it has to follow through and keep the pace going. It's no good having people laugh at the first two words if they end up frowning by the end of the sentence. So let's see where this one is taking us.

WOW! What a development. The horse doesn't trot. It doesn't gallop. It doesn't even canter. It walks! Like a dude! What a horse! Where will this horse take us next!

A horse walks into a bar.

Damn! What kind of genius was capable of stringing together such a dynamite scene. Picture the bar, a regular saloon with oak and so on. An ordinary day. Not much happening. KAPOW! The doors swing open and who should stroll in? Mr Horse! Nobody saw that coming, I guarantee you.

I haven't been to every bar in the world, but I can tell you one thing I have noticed about bars: horses don't tend to come strolling in.

TIME OUT! STOP THE CLOCK!

If you've ever met a bartender you can already guess what they're gonna say:

Get out of here, horse! No horses! Hey, you with the steel feet, take a hike!

Or some variation on the above.

But this bartender, whoah boy, no, here is a cool customer. Check this scene:

He doesn't shout. He doesn't even raise his voice, he "says". Says! That's his whole demeanor, that of a person speaking. This is not the expected response of a bar tender confronted by livestock in his place of business.

What then does he say?

Why the long face?

AH, his casual attitude is perhaps because he has failed to recognise that this patron is unlike any usual patron in the bar.

Perhaps our barkeep has an occular deficiency. He has not observed anything unusual in this customer and he has used a customary psychological observation on the part of a barkeep, that of taking a counsellor's stance and preparing a shoulder on which the visitor can pour out all of his troubles in the world.

He is asking the new customer, "why are you sad?"

Okay, what happens next in the joke?

Nothing happens next. Wait up. That's it? That's the end? Then now we, the eager listeners must track backward a step in the chain of reasoning and see wherein we have faltered in our conclusion.

He has been confronted with a horse, and has enquired after the reason for any sadness he currently posseses.

He has said unto the horse:

Why the long FACE

The skeletal structure of the horse's cranium is typically elongated?!

The entendres are doubled!

At once this speech has two modes of interpretation.

It may, as we first thought, imply a question about well-being, but it may, equally, be an anatomical inquisition into the nature of horsey skulls!

Allow me to draw a diagram.

He is a normal customer in a bar: 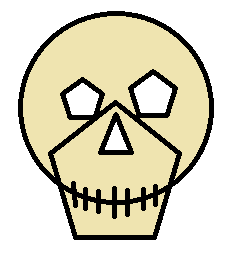 I draw this in order to bring your attention to the proportions of the height against the width. It is roughly the golden ratio, of 1.618033, or thereabouts.

Compare now a similar X-Ray of the equine cranium: 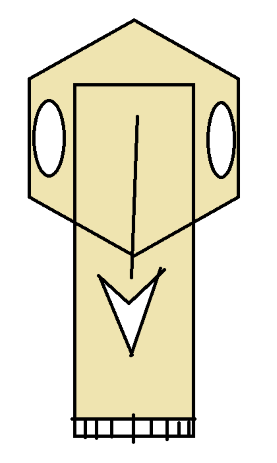 (These are not actual X-Rays, these are quickly sketched "Artist's Depictions" of an X-Ray and I apologise for their inexact nature)

Unless you are suffering some kind of Horse Blindness, you will observe without delay that the proportions are severely elongated.

We can thus reason that the bar-employee, having never observed a horse inside his establishment at any time prior to the moment encountered within the joke, compared said trotter, mentally, to a regular customer, noted the elongation and inquired after it.

Considering all this now, I am certain you are beginning to laugh.

As you have certainly witnessed, the analysis of jokes is a very powerful technique and gives tremendous enhancement to their enjoyment.

More about that horse

Ah, in late breaking news, I've received some more information about equine exploits in drinking dens. I'm told this by a reliable source:

A horse walks into a bar and orders a pint. The barkeep says "You're in here pretty often, do you think you might be an alcoholic?"

(Let's take a moment to appreciate the line, "you're in here pretty often" -- that is a kind of self-awareness about just how many jokes there are about the horse and the barkeep, and it hints that all such horse/barkeep jokes exist in a single congruent universe, a canonical HBU, rather than each being a kind of pocket universe, expressly conjured for the sake of the joke and immediately deflated into a liminal space afterwards)

The horse replies, "I don't think I am," and vanishes from existence.

Ah, now it should be readily apparent to the reader (or listener) that the horse has inverted philosopher Rene Descartes famous quip "I think therefore I am". Perhaps it would be best to introduce that before the joke, but that would be putting Descartes before the horse. 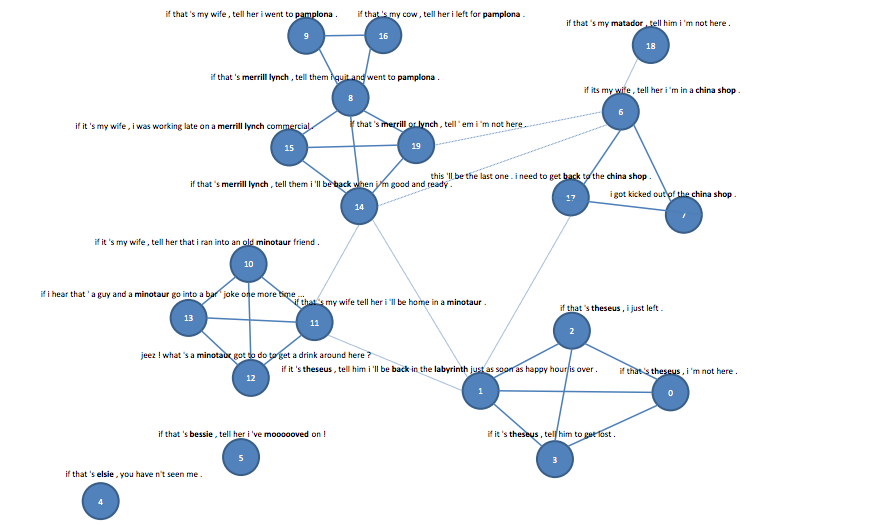 I really like the above image, from the article "Gizmodo: Why are computers so bad at jokes".

Here is a joke that I think rewards further study. And a retelling of a conversation I had, where I extracted the immense pleasure of explaining the joke.

(The people in this conversation are me (played by myself) and jack played by someone else.)

Me: If I do the Borat voice once more, I'll be getting a divorce

Therapist: And who told you that?

Jack: I don’t get it. 🤷‍♂️ I mean, the fact that the therapist has to ask him who is odd, it's obviously his wife. Is that the joke? I don't get it.

me: Ah. Allow me to explain. You will enjoy this, because lengthy explanations always make jokes more enjoyable.

me: He is about to say “my wife” but he is regretful to the point of tears, because he knows he is duty bound to answer the question truthfully, and yet he also knows that he cannot say it without habitually relapsing into his borat voice, and thus ensuring his own divorce from: https://m.youtube.com/watch?v=Zw16aew4Pt0

me:So it’s an inside joke that relies on you already being sick of people saying “mah wahfe” in borat voice. If you satisfy the prerequisites for the joke it is a very pleasing construction as it meticulously avoids saying the actual punchline. “In-jokes” are useful for reinforcing social bonds.

me: And this particular joke is a tremendous example of "making the person say the punchline inside their own head. It is like the famous use of "negative space" in the FedEx logo.

me: (provides diagrams and lengthy explanation)

me: (puts together PowerPoint deck and continues at length)

Jack has left the conversation.