Of my ancestors, the earliest we know anything about is John Bambrick, born 1791 in Windsor, England. His parents were possibly Valentine Bambrick (b1770, in the parish of Longford) and Frances Bambrick (b17__, nee Logan). I haven't been able to trace further details about his parents.

John fought at The Battle of Waterloo, on 18 Jun 1815, in the 11th Light Dragoons as a Sergeant in Captain Thomas Binney's Troop. John's younger brother Robert Bambrick (later "Captain Bambrick") also fought at Waterloo, as a Private in Captain. J.A. Schreiber's troop. Napoleon Bonaparte was defeated in that famous battle. Had Napoleon realised he would be coming up against two Bambricks, we can only assume he would've called in sick that day. 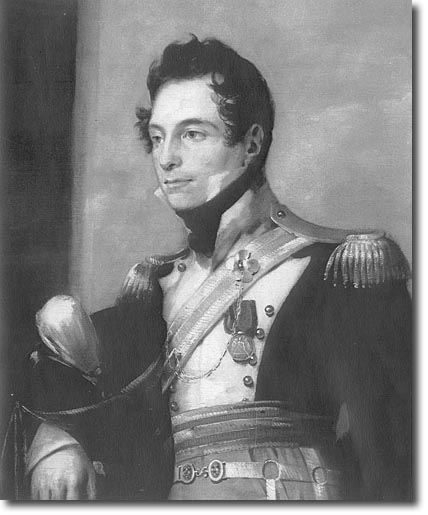 Here is a quote describing the 11th light dragoons in the battle of Waterloo, it is from this page: 11th Light Dragoons

With the return of Napoleon in March 1815 the war with France resumed and the 11th arrived at Ostend on 2nd April. They were in Vandeleur's brigade with the 12th and 16th and had an unprecedented strength of 947 men. They came under heavy attack at Quatre Bras but did not suffer badly. On the 18th June 1815 the Battle of Waterloo began after a terrible night of torrential rain. It was a frustrating morning for the British cavalry who had to stand and watch an infantry battle. Against Wellington's wishes, the heavy cavalry made a brilliant charge that was spoiled by it's failure to re-form. The 11th under the command of Lt Col Money were sent into action when it looked as if the enemy were breaking up. They broke a French infantry square and carried on with the pursuit of Naploeon's fleeing soldiers. Wellington entered Paris in triumph on 7th July escorted by the 11th and others. The regiment bivouacked on the Champs Elysees and became part of the army of occupation in France and Belgium. On 20th November they eventually arrived home after 3 years on the continent. A new regimental depot was set up at Maidstone.

After Waterloo, we know John and Robert were stationed with the 11th Light Dragoons in India and both served at the siege and capture of Bhurtpore. (Sometimes spelt Bhurtpoor).

Why were the 11th Light Dragoons in India, sieging and capturing Bhurtpore? Well that's a pretty long story. And this was the "second siege of Bhurtpore". So the simplest reason they were there -- because the first siege didn't succeed, and nobody holds a grudge like the British.

Before getting into the history of the second siege of b., I want to answer the question "What is a dragoon?" and more specifically, "What is a light dragoon?"

Answer: A light dragoon is basically the same thing as an Hussar. So similar in fact that the 11th Light Dragoons were later renamed the 11th Hussars.

So we're good now and I can move on, correct?

Oh, you don't know what an Hussar is? I thought I answered that already. It's like a dragoon, but lighter.

A dragoon is a class of "Mounted Cavalry". Mounted implies "Mounted on a Horse" -- so dragoons (and hussars) ride horsies (Or they did in the time of JB-b1791). But what does "Cavalry" mean? It's from the French word "cavalerie" which derives from cheval meaning horse. So a dragoon is a horse-riding horse-rider. This is not going well, we've left out the other aspect -- they are military fighting people, and they have specific weapons and armor. Do you care about that stuff? You do. Ok, let's get into it.

Heavy cavalry have heavy armor and significant weapons. Light cavalry (such as Hussars and light dragoons) have less armor, lighter weapons, and are more versatile, manoeuvrable.

From the same source as above, here is a description of the 11th Light Dragoons in Bhurtpore.

They did not have much time to enjoy their home country because in February 1819 they were shipped off to India. They were stationed at Cawnpore and Meerut and did not see serious fighting until 1825 when they took part in the siege of Bhurtpore. This was an apparently impregnable fortress garrisoned by 15,000 anti British Indians under the leadership of Doorjun Saul. The British, led by Sir Stapleton Cotton, now Lord Combermere, had 30,000 men. The enemy were aided by a British deserter, Bombadier Herbert who instructed the Indian artillery making them more effective. The cavalry was commanded by General Sleigh, an ex-11th officer, the brigade was commanded by Col M Childers, also ex-11th, and the regiment itself by Major Bellingham Smith.

After a five week siege, the mining endeavours of the engineers and bombardment by the artillery had weakened the defences enough for Combermere to order an attack. Bellingham Smith led 80 men and 2 Lieutenants into the fortress after an enormous explosion had created a breach big enough to storm through. The explosion killed many inside and some outside the walls. Enemy resistance did not last long and large groups fled on horseback pursued by the 11th Light Dragoons. They took many prisoners and captured the unfortunate Herbert who was hanged from the nearest tree. The regiment's casualties were 2 men killed, one officer and 12 men wounded and 4 horses killed.

There was a mutiny in Cawnpoore in 1857, but the family had departed almost twenty years prior to that. Here's a depiction of Cawnpoore, pre mutiny. Youngest son, Valentine, fought (for the British) in response to that mutiny. 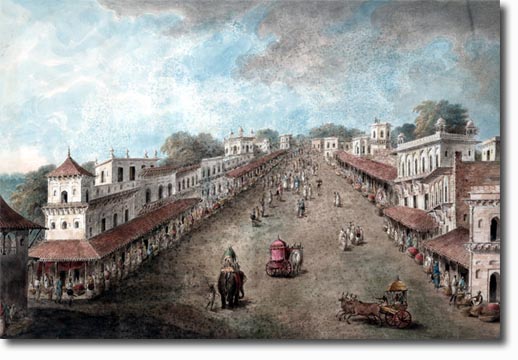 This is an engraving from 1814. It shows the hustle and bustle of a normal barracks town.
source

On the 12th of September 1838, "after long and faithful services" John was discharged from the 11th Hussars, and retired to Windsor.

His sons and younger brother meanwhile, went on to do a bunch of things.

The churchwardens of Windsor have received a letter from the War-office, stating that troop serjeant-major, John Bambrick, a native of this town, who was discharged from the 11th Hussars, on the 12th of September 1838, after long and faithful services, has been awarded the gratuity which is granted by her Majesty to discharged soldiers who have conducted themselves meritoriously while in the army; and the authorities of the War-office notify that fact to the churchwardens with the object of making it generally known in the parish to which he belongs.
Selected Reports from The Windsor and Eton Express, 25th June 1842 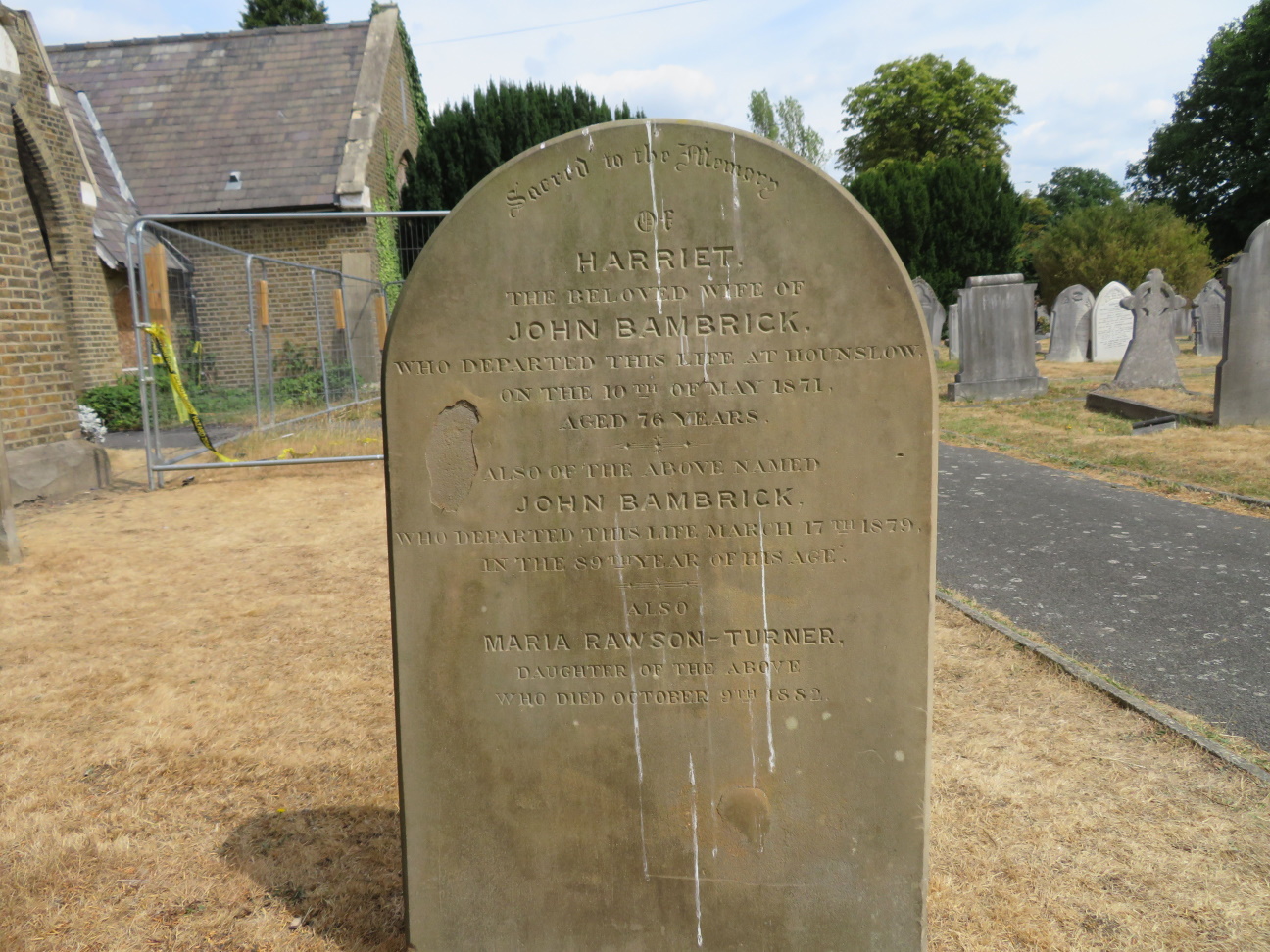 Sacred to the memory
of
Harriet.
The beloved wife of
John Bambrick.
Who Departed this life at Hounslow
On the 10th of May 1871
Aged 76 Years
. . .
Also of the above named
John Bambrick
who departed this life march 17th 1879
in the 89th year of his age
. . .
Also
Maria Rawson-Turner
Daughter of the Above
Who died October 9th 1882

Her place of birth is listed as "Chelsea, Royal Borough of Kensington and Chelsea, Greater London, England".

John Bambrick Medal Location: Unknown British 11th Light Dragoons Sergeant Sold: Online June 2014 • £2,500 the pair 1970
October 1966 Notes: Served in Captain Thomas Binney's troop. Sold originally in group with Bhurtpoor A of I and L.S.G.C. Medals in 1966. Sold with just A of I medal in 1970. The Waterloo has clip and ring suspension and the naming is stated as being dubious. Sold on a non return basis.