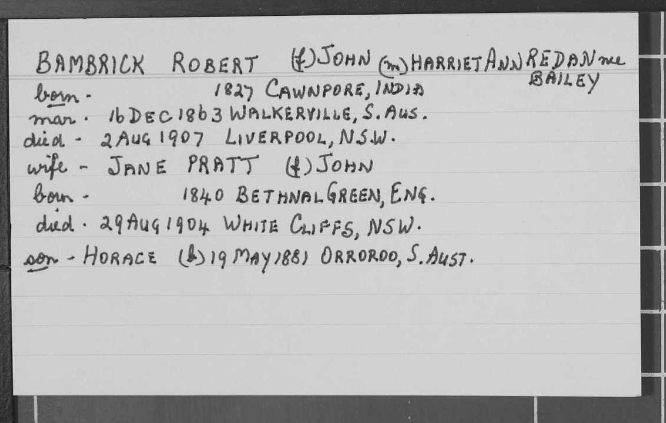 Illegal Grog-Selling. For having supplied a man with a couple of nobblers at the Defiance Mine, Jane Bambrick has been fined £20, or in default two months' imprisonment, by the Melrose Bench. On a second charge she received a similar sentence.

P.T. O'Neill v. Jane Bambrick. Selling less than five gallons of liquors at Defiance Mine en January 25. Daniel McLeod, labourer, proved having received two nobblers of brandy, and having paid 1s. James Cobiac, for the defence, swore that he was at Bambrick's place during the whole of the day mentioned, and that McLeod was not there at all. Fined £20, or two months' imprisonment. A similar information charged a similar offence on January 26. The same witnesses gave evidence. Fined £20, or two months' imprisonment.

R.; Bambrick This was an appeal from the Mount Remarkable Police Court where the appellant Bambrick had been convicted and fined £20, or in default ordered to be imprisoned for two months, for selling two bottles of ale and a nobbler of brandy, without having a license. Mr, Bruce, with Mr. Mathews, appeared for the appellant. The respondent did not appear. The evidence was put in and read, and the whole case appeared to rest upon the testimony of a half-caste named Martin, who stated that he bought the liquor from the appellant, and paid for it. He alleged that an information had been laid against himself, but was withdrawn on his promising to give evidence against the appellant. The evidence in defence contradicted that of the prosecution on several points, and alleged that although the drink was supplied, there was no payment for it. Mr. Bruce, contended that the evidence for the prosecution was strongly tainted, and could not be relied upon. He thought when the Court looked at the fact that the principal witness was an informer giving evidence in the hope of a reward, and that he was contradicted by material evidence for the prosecution as well, as that called in defence, the Court would see that the convicting Magistrate was not justified in deciding as he did. The Court were about to confirm the conviction upon the positive evidence of Martin as against the negative testimony of two or three other witnesses that they saw no money paid, when Mr. Bruce intimated that, he could call evidence that payment was not made, and upon his application the case was adjourned for two months

Mrs Bambrick, the wife of Mr Bambrick of the Tarella Government Tank and mother in law of Mr George Moblem of Coulter and Maiden, butchers here, died in the local hospital yesterday from peritonitis after a day's illness and was today (wednesday) interred in the cemetary, a number of relatives and friends paying their last sad respects to the remains of the deceased.

— Find A grave: Jane Pratt Bambrick (Thanks to Judy Schramm for maintaining this item and thousands more)