Ethics Man Did What Had To Be Done
—Darkside

A dilemma (Di - Lemma, meaning "two" lemmas) is a choice between two lemmas. Which lemma do you prefer? This lemma or that lemma?

What precisely is a lemma? 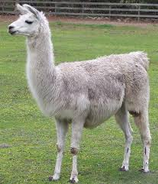 It's not quite the same as a llama. (And it's even less like an alpaca.)

A lemma is a 'subsidiary' theorem, a quasi-theorem, or (more helpfully) a direction or bearing.

A dilemma is a choice between two bearings. The consequences of choosing one bearing or another are not fully knowable. We must choose anyway.

The prisoners dilemma! What a pickle! What a thing! Where do we start?

Two people have committed a crime together, and were equal masterminds in the planning and performance of the deed. Let's call them Jake and Laribee, though their names, and indeed, the particulars of their crimes, are unimportant.

The prosecutors have nabbed the duo, but don't yet have enough evidence to secure a conviction on the principal charge. All of the usual 'good cop/bad cop' shenanigans have failed, and thus the prosecutors have decided to turn to the literature on Game Theory to see what they should attempt next.

Jake and Laribee are each placed in solitary confinement (separately, not together) and they have absolutely no means of communicating, not even the traditional tapping out of Morse code on the plumbing system.

So the prosecutors make a deal with each of them.

Anyway, if you find Jake and Laribee's whole situation particularly fascinating then you ought to read whatever you can about Game Theory. It's packed with that sort of stuff.

Here is an Explorable Explanation about the Prisoner's Dilemma by the amazing Nicky Case that shows how this situation gives rise to the value of trust. (In short: if they go through this situation many many time, and they have some level of trust in each other, then they will each end up better off then they would if either or both of them lacked trust. 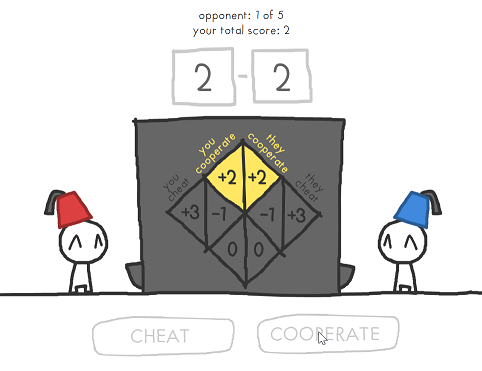 But no tour of the great dilemmas, however brief, could pretend to be complete unless it stops to admire The Trolley Problem.

The Problem with Trolleys. Where to begin?

Go with me now. Take my hand. Are you holding my hand? Good. Hold it tight. We are travelling to a scorching hot desert of a punishingly warm summer's day. He we are now. In the middle of nowhere: a flat expanse, with desert stretching away in every which.

And here, in this barren landscape, there is nothing but The Railway Track.

A straight track, with one side track, and a junction.

And any moment now the Desert Express is going to come barrelling along at top speed. No matter what we try, we will not be able to stop that train.

But what's this! Oh no! On the track straight ahead, there are FIVE PEOPLE, tied to the track. Nothing we do can untie them.

If we do nothing, they will surely die.

Fortunately we have noticed that there is a switch. And if we press the switch, the train will be diverted at the junction and instead of ploughing into and killing the five people, it will head harmlessly along the side track. Phew. That's a relief.

So we move toward the switch. But suddenly we realise. Oh no! There is one more person tied to the track. They are tied to the side track.

If we divert the train down the side track, then we will be guaranteeing that this person dies. But if we let the train continue on the main track, then FIVE people will die.

What do we do?

Do we divert the train, killing 1 and saving 5? The blood of that one will surely be on our hands. He's looking at you now. Staring you right in the eye. Then do we do nothing? Killing 5 and sparing 1, but feeling safe in the belief that none of this had anything to do with us?

Taken to its logical extreme, we find the ultimate reformulation of this idea in the essay CAN BAD MEN MAKE GOOD BRAINS DO BAD THINGS? (and its equally thrilling explanatory notes)