The "Bronze Orange Bug" is a large stink bug which is green when smaller, orange when juvenile, and dark brown when fully mature. At all stages of its development it is pure evil in concentrated form and must die a swift and painful death.

It flourishes on citrus plants, particularly ones which are stressed (for example lacking in water, suffering from rust/fungal diseases etc.)

The main defense mechanism of these bugs is a thick acrid and very aromatic* liquid secretion, which can be sprayed up to 75 centimetres, with some accuracy.

* aromatic in this case is a euphemism for "disgusting smelling, toxic, poisonous, evil, catastrophic, apocalyptic and vile."

It contains an oily component named "cimicine" on which the internet is strangely quiescent.

If cimicine reaches your skin it produces a bright red pigment, which rapidly dries the skin, and immediately causes intense stains. The stains darken and become brown over the following days.

If you are attempting to remove Bronze Orange bugs from a plant, you must wear more than 1 pair of gloves. Their stain can easily penetrate through a single layer of rubber gloves. Eye protection is also essential. A bee-keepers suit, welders goggles and a nuclear-fallout cover-all might also be advisable.

Suggested ways of removing these stains are described below, along with the results of testing each method.

This removes the smell, but does not remove the stain.

Milk is used as a treatment if this toxin gets in the eyes. As a stain remover it achieves nothing.

Keep doing this long enough and you will be guaranteed to aggravate the skin, but you won't remove any cimicine at all.

This is a much-loved stain remover. I tried scrubbing with it, and then soaking in it. Neither of which made the slightest difference.

Interestingly, this is useful in removing henna-dye. Against cimicine it does nothing!

A weak acid. Too weak for cimicine! This does nothing!

A tattoo removal laser gun may cost a lot of money and take a lot of time for training and certification, but it does not remove cimicine stains.

At the time of writing, this is my recommended approach to cimicine stains. To the bone, to the bone. 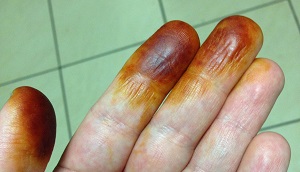 After a few hours

After a few days